Note: I intend for the word “female” to cover those who identified and were accepted as female. I do not mean to police the term in any way.

Lately, I’ve been curious about the lives of female artists in the 18th century, painters in particular. They are a hard lot to track down.

In 1971, feminist art historian, Linda Nochlin, wrote, “Why have there been no great women artists?”

There were, but you have to go looking for them. For centuries, female artists were denied exhibitions and their place in museum collections at a far greater rate than their male peers. Their work wasn’t any less important or skillful but it was framed that way purely because it was the work of women.

Those who did succeed did so because of their privilege.

The women who succeeded in the misogynist landscape of Britain’s 18th century art world were either related to someone in the peerage, or friends of ambassadors and players in high society. All were white and presumably Christian. It is hard to speculate on the inclusion of LGBTQ+ artists for a variety of reasons, not the least of which because the term “lesbian” did not exist but “special female friendship” did.

The Royal Academy of Arts was founded in 1768 by a group of thirty-six artists and architects. They petitioned King George III to establish an independent institution run by artists, elected by their peers. The intention was to have an annual exhibition, create an art school, hold lectures, and be open to the public.

It is important to note that there were two women among the petitioners. However, one was the daughter of another founding member and the other was a close friend of artist megastar, Sir Joshua Reynolds (see: privilege) who painted this gorgeous portrait of the king. It would take until 1936 before another woman would be elected to the Academy!*

Today it is still an independent and privately-funded charity with significantly more gender parity.

How did one become an artist in the 18th century?

It certainly helped to be rich and a member of an influential family. But even Benjamin West, a self-taught portrait artist, conquered his meager beginnings and became an Academician. (He was born in Pennsylvania in 1738 to tavern owners.)

But, if one was not elected into the Royal Academy, one still had the option to apprentice with a master. At the time however, masters were discouraged from taking on female pupils. Those who did often blurred the lines between offering an apprenticeship and a position as a servant. This distinction makes it challenging today to know the true roles of persons in a studio.

Ok, but what was the real obstacle? 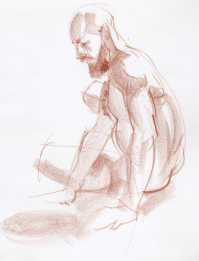 Studying male nudity was key to becoming an artist. Between societal attitudes on male nudity, women viewing male nudity, and the question of whether women even had the ability to learn, often excluded women from these opportunities.

Then how did one overcome societal attitudes?

Why does it matter how few female artists there were when we have such stunning examples of art from men?

By excluding women from the art world, the visual history of society is almost entirely in the male gaze. This frames for us today what was important to society then, in that place, by those communities. By excluding a whole set of people, their history is deemed unimportant, disposable, and far less comprehensible to any future study.

tl;dr: the male vs female gaze

Men, women and the art of exclusion gives an excellent example of why the lens of the gaze is important:

One of the great themes of European painting, that of Susanna and the Elders is all about the male gaze. This Biblical story, in which a young woman is spied on by old men, was painted by many Renaissance and Baroque artists because it was an opportunity to depict naked flesh. Yet Artemisia Gentileschi turned the tables and painted it from her point of view, making the woman who is being spied on the central character and showing her anxiety.

*In 1913, suffragettes occupied the Royal Academy galleries to protest the exclusion of women. One woman slashed John Singer Sargent’s portrait of the author Henry James, one hacked at a painting by George Clausen, and another attempted to start a fire in the toilets.

**Caveat emptor: Portraitist Maria Cosway was forbidden to paint once she married. It was a marriage of convenience and her husband was a dick. (Since his name was Richard, this is hardly speculation.)

More information on Art and Gender:


Join Hallie’s newsletter and read
Rescuing Her Rebel for free