When I was little, we lived in a suburban community northwest of Baltimore. We were Jewish, some of my neighbors were Jewish, most of my activities took place at the local Jewish Community Center. I didn’t know I was different from most of the population until I went to elementary school.

While my peers ate mayonnaise sandwiches on white bread for lunch, I often brought ethnic foods reflecting both my own culture and my mother’s attempts at the recipes she found in the Sunday New York Times.

I remember asking my mother about mayo sandwiches once. After her resounding, “Feh!” she made a face so vile, you’d have thought I asked for a mosquito sandwich.

So there I went, with my Mork and Mindy metal lunchbox, unsuspectingly to the cafeteria. I unsnapped the latch and turned back the lid. First, I took out my thermos, flipped up the straw, and took a sip of tepid chocolate milk. Then, I took out my sandwich.

There would have been less fuss had I brought mosquitos. I’m sure of it.

Gleefully and obliviously, I chomped into my sesame seed bagel*, enjoying the chewy, dense bread schmeared with tangy cream cheese.

My classmates pelted questions at me like spitballs: What is that? Why is it round? Why isn’t it white? Did you know the sun will die out in a million years and no one will survive? Why are you eating a doughnut for lunch?

The cafeteria was a tough crowd. They’d never heard of a bagel before, yet somehow knew all about solar death.

What’s changed? Well, for one, that northwest pocket above Baltimore is now over-developed with a massive mall and subway system. And bagels are everywhere.

Bagels are traditionally an Ashkenazic Jewish food. The Ashkenazi are Jews descended from Germany and Eastern Europe. (There are other sects of Jews who have their own delicious, cultural foods such as Sephardic, Mizrahi, and Ethiopian.)

Bagels are made from yeasted wheat dough formed into a ring by hand. They are boiled, and then baked. The perfect bagel (and this is *not* debatable) has a dense, chewy interior and a crisp exterior. There is a hole in the middle to help the dough cook evenly. Back in the day, they were strung on dowels and sold in the market.

Traditionally, toppings consisted of seeds, such as poppy or sesame. Today, the dough can be rainbow, mixed with jalapeños, studded with chocolate chips, or seasonally afflicted with pumpkin spice.

Where did the bagel come from?

There is some debate over the genesis of the bagel. It mostly depends on how one defines a bagel. By ingredients? Shape? Country of origin?

I came across Egyptian hieroglyphics at the Louvre in Paris, and among the depictions of daily life were rolls with a hole

The story of the bagel’s origin touted the most begins with German immigration to Poland in the 14th century to help build the economy. They brought with them their thick, bread-like pretzels that morphed over the years into a circular roll with a hole in the middle called obwarzanek.

At about the same time, the laws in Poland prohibited Jews from baking bread. The reasons are complex and hateful. (See: blood libel in the Middle Ages.) To get around this law, Jews boiled their dough first instead of baking it, thus creating the bagel, a symbol of resistance.

Where did the bagel go?

Traveling west in the 19th century, Ashkenazi Jews brought bagels to both England and America.

The first bagel shop in England opened in the Brick Lane district in the East End of London. There were already Sephardic Jews living there since at least the time of Cromwell. (In 1656, Cromwell recognized Jews living in London, and though he did not grant them citizenship, he did not expel them either.) The East End, for obvious reasons, became a safe area for other Jews to live and set up shop.

Therefore, I posit that there is no logical reason for all those gorgeous, broody, and deeply conflicted noblemen resident in Victorian-era romance novels to not have a schmear (clotted cream?) on a bagel with their morning tea. Maybe I’ll write one and call it, “Tempted by the Baron’s Bagel.”

Further west, Polish Jews brought their bagels to the Lower East Side of Manhattan. There, the bagel baking businesses boomed. As with sweatshops in this era, 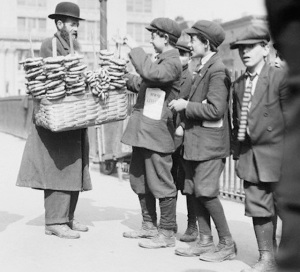 working conditions were deplorable. Educated in Eastern Europe by socialism, these immigrants organized unions and founded the Bagel Bakers Local 338 in 1907. The union not only demanded fair wages and safer working conditions, but they also established bagel standards for production. This one union controlled all bakery contracts in and around the city for bagels until the 1970s. (Note: they were the ‘Beigel Bakers Union’ until 1964 when the spelling changed to ‘Bagel’.)

The union proudly kept bagels a niche market by only conducting meetings in Yiddish, thereby keeping the membership Jewish.

Expansion in the Modern Era

In 1958, the man who gave us the folding ping-pong table invented the commercially viable bagel machine. A few years later, Harry Lender and his son Murray, with Florence Sender (an American Entrepreneur and professor at MIT’s Sloan School of Management), leased the technology and pioneered the production and distribution of frozen bagels beginning in the 1960s.

This was the end for the Bagel Bakers Union, and by extension, the traditional bagel.

The upside: Americans embraced the bagel and made it ubiquitous.
The downside: Most Americans today have never had an authentic bagel.

*My father took business trips up to Manhattan. He’d bring back bagels from Zabar’s.

One thought on “Think You Know Bagels?”