In A Widow’s Guide to Scandal (July 2020), the town where the heroine lives is threatened with destruction by the British. I based the fictional attack in my book on the very real attack on Fairfield, Connecticut by the British in 1779. I first learned about this event of the American Revolution when I lived in Fairfield and attended a Town Green Walking Tour presented by the Fairfield History Museum.

By July 1779, British General Sir Henry Clinton was done dealing with the insufferable inhabitants of Connecticut, as was his pal and Colonial Governor of New York, Major General William Tryon.

Not only was seventy-five percent of the population disloyal to the king, but Connecticut supplied more troops to the Continental Army than any other colony except Massachusetts. The small, coastal colony was full of rebels who used their whaleboats to terrorize Loyalist on Long Island. They were also masterful privateers, capturing over 500 British ships during the war. 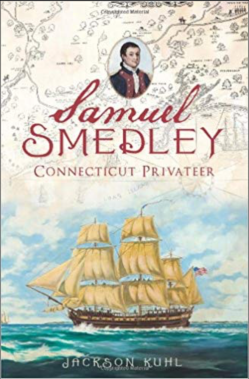 Privateering in Connecticut was big business. It was the means to supplying the Continental Army with everything from food to ammunition.

These same privateers and rebels often acted as spies from Black Rock Harbor. In fact, Caleb Brewster, one of General George Washington’s spies from his Culper Ring lived there. (Today, Brewster Street off Black Rock Turnpike is named for him.)

And so it was that Clinton ordered Tryon to raid the coastal towns, from New Haven to Norwalk. (Fairfield sits between the two, closer to Norwalk, and was the largest port in Connecticut at the time.)

At about four in the morning on July 7, the coast guard at Fort Black Rock in Fairfield (now known as St. Mary’s by the Sea in Bridgeport) spotted a fleet of British ships off the coast. They sounded the alarm by firing shots into the sky. Unfortunately, a fog rolled in and no one knew if the British were anchoring or sailing on.

Some people loaded up their carts and took their families further inland to safety, while others hid their silver and stayed.

Five hours later, the fog cleared and forty-two square-rigged tall ships were anchored off Fairfield Beach. The ships had sailed from Manhattan, up the East River and into Long Island Sound.

By late afternoon, 800 British, Hessian, and American Loyalist soldiers came ashore and hiked the great marsh into the center of town. Not long after, 1700 more British and Hessian soldiers joined them.

Fort Black Rock fired on Tryon’s troops to little success. The Fairfield militia fought back with muskets, but were pushed back. However, they were able to destroy a crucial bridge over Ash Creek, making it impossible for the combined British forces to attack Fort Black Rock.

The attack on the town took two fulls days. When it was over, Fairfield’s military stores were taken or destroyed, and two hundred houses and all public buildings were burned to the ground. Tryon had given protection to the churches, but the Hessians burned them, too.

Only six houses survived. Four were used by Tryon and his officers. The fifth was owned by the brother of an American Loyalist soldier who piloted the landing of the British at Fairfield Beach. The home was said to have been spared by prior arrangement. And the sixth house didn’t burn because a servant hid in the attic. Every time it was set on fire, she put it out. After this happened several times, the soldiers decided the house was haunted and left it alone.

The attack had long-lasting effects. Ten years later, when President Washington stayed at the Rising Sun Tavern built on Fairfield’s Town Green in 1780, he recorded in his diary that, “The Destructive evidences of British cruelty are yet visible both in Norwalk and Fairfield.” Burned-out chimneys still littered the communities. The port of Fairfield never regained its clout, giving neighboring Bridgeport the opportunity to become an economic powerhouse of the 19th century. But that’s a story for a different day.

More information on the Burning of Fairfield:

Images in order of appearance:


Join Hallie’s newsletter and read
Rescuing Her Rebel for free

*Please note that this post contains an affiliate link and any sales made through such links will reward me a small commission – at no extra cost for you.